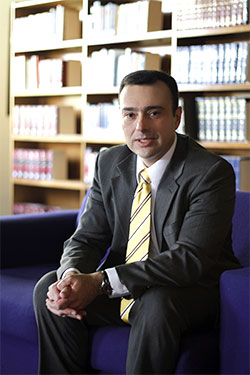 Roberto Ortiz de Montellano was born in Mexico City. He has lived and studied in Mexico, the U.S. and Europe. Mr. Ortiz de Montellano obtained his Bachelor’s Degree in Law in 1994 from the Instituto Tecnológico y de Estudios Superiores de Monterrey, one of Latinamerica’s most prestigious universities. Right after finishing his undergraduate studies, he started working in the banking sector. In a period of ten years, he worked for Banca Serfin, Bancomer and Banca Afirme, three of the largest banks in Mexico at that time. He started in the Loans Division and then moving on to the Trust Division, where he handled corporate, international and real estate trusts.

In 2004, Mr. Ortiz de Montellano traveled to Belgium to obtain a Master’s Degree in Law (LL.M.) from Ghent University Law School, completing his studies the following year. He then returned to Mexico to join Goodrich, Riquelme y Asociados, one of Mexico’s most prestigious law firms, where among other tasks, he provided legal counsel to foreign companies investing in real estate projects in Mexico.

Mr. Ortiz de Montellano was, from 2008 to 2013, Head Counsel at Grupo Proyecta, an important group of real estate investors with large housing and commercial developments in Acapulco, Puebla, Merida and Queretaro.